When I was in my twenties, I developed tendinitis in my hands, wrists, and arms. I was working at a temp job as a secretary to 27 people, typing 90 words per minute all day long at a bad keyboard set up.

I was also writing a novel when I got home and playing guitar.

At the time, there wasn’t a lot of awareness of carpal tunnel syndrome, tendinitis, or other RSIs (repetitive stress injuries) from keyboarding.

A lot of people implied or outright said that it was all in my head or due to stress. The suggestion that I could somehow fix myself simply by relaxing only made me feel worse.

My fingers went numb during the night, my hands and wrists tingled, and pain shot up my arms from my hands. Yet the doctor I saw through the company's workers compensation policy told me to keep working unless or until there was nerve damage. Then I could have surgery, which was the only real treatment option at the time.

That struck me as a phenomenally bad idea.

I quit the job and moved home to my parents' house in the hope that a few months of not working would help my hands heal. Instead I plunged into depression and anxiety.

Not Working, Not Writing, Not Functioning

For the first four or five weeks home, I found it very hard to get out of bed.

Once I did, I lay on the couch and watched television until the late afternoon.

I struggled to figure out some other type of job I could do to support myself again. All my work experience, though, had to do with typing and computers. I don't remember writing, and playing guitar hurt my hands.

The main things that I thought of as being who I was — a musician, writer, a hard worker — had all been taken from me. And I didn’t know how I get them back. (All of this also coincided with a break up with my boyfriend of six years, so I'd also lost my primary relationship.)

In one way, whether I could write fiction or not “should” have been the least of my worries. I hadn't made any money writing by then, so it wouldn't help me back to living on my own and supporting myself.

Yet after my fear that I'd never be able to move out of my parents' house again was my fear that I wouldn't be able to write. Without writing, I wasn't sure who I was or how much I'd get out of life.

A while back I wrote an article Six Ways To Get Beyond The Myth Of Writer's Block on issues that get labelled “writer's block” with suggestions for dealing with each.

Looking back at the article, I realized it contained an underlying, unspoken assumption. Which was that the person who wants to write but can't is otherwise generally healthy and physically well. (I revised it to try to address that.)

But many people live with chronic conditions that make any type of work or pursuit, including writing, far more difficult if not impossible. Many others are fortunate enough to be generally well much of their lives but nonetheless go through periods where their mental, physical, and emotional health limits whether and how much they can write.

Because of that, I'm sharing what I wish I'd known when I struggled so much with physical pain, depression, and anxiety. With these caveats:

If I could go back, I'd tell myself that to love writing and to write can be a wonderful thing, but sometimes other things need to take priority. Things like physical, emotional, and mental health.

I felt I had to figure out all at once (a) all my health issues, (b) a new occupation, and (c) how I'd ever write again without severe pain.

And I felt like a failure because I couldn't.

Now I'd tell myself that before I could write I needed to be sure I kept breathing and stayed alive. If I was able to write and it helped me do that, great.

If writing made me feel worse, though, then it was okay, and quite possibly necessary, to mentally set it aside for a while and focus on whatever would help me keep functioning.

While I rarely feel the extreme anxiety I experienced during the year and a half I moved back in with my parents, I've had a few times nearly as bad.

Likewise, life events sometimes trigger weeks or months of depression. It's like a broken bone that hasn't quite mended. Stepping a certain way or falling sometimes breaks it again.

And though my fingers rarely grow numb, if I am at the keyboard too long, my hands still get sore despite the many accommodations I've made over the years. (Those accommodations include using ergonomic keyboards, dictating, switching computers, stretching more, and taking regular breaks.)

If I'd know that decades later I'd still be dealing with many of these issues, maybe that would have made me feel worse. 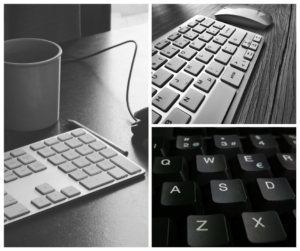 Because for me the hardest part was that I kept wanting to wake up one day and have my old life back. I only started to feel better emotionally and mentally when I realized that wasn't happening. That the only place I could start from was where I was.

In the long run, my need to find a new type of work led to my retraining and becoming a paralegal and later a lawyer. As a result, a decade later, I was far better off financially and professionally than I had been when I developed the tendinitis.

For the physical aspect of writing, and generally to deal with my on-going hand, wrist, and arm pain, I made dozens if not hundreds of small changes like the ones I mentioned above, as well as lifestyle changes.

There were changes as small as:

I also had to adjust my writing routine. I'd once written for 1-3 hours at a time and focused on writing novels only.

Now sometimes for days or weeks or months at a time I couldn't do that, so instead I did some of the following:

Some of these strategies came in handy years later when I was working so many hours that for stretches I could only write in small increments of time. (See Writing A Novel 15 Minutes At A Time.)

I also found that I needed to be far more flexible in my goals. Though it definitely took me a long time to make peace with that.

If you’ve read The One-Year Novelist, you know I am big on setting specific goals with time frames. When I struggled with depression, anxiety, and physical pain, I had to adjust that strategy.

During the worst of my depression, I didn’t set any writing goals at all. If it made me feel better to write, then I wrote. Otherwise, I didn’t.

When my depression became more manageable and my tendinitis was slightly better so that I could work at a job though still in a lot of pain, I started writing in a journal when I could. From an emotional perspective, that was an easy way to write because I never show my journals to anyone.

But I didn’t set any goals for writing a certain amount per day, week, or year.

I had a general goal in mind wanting to write another novel. But I didn’t worry about when I would be done. I just aimed to finish at some point down the line.

That was unusual for me, because I love lists and plans. They help reassure me that I won't lose track of anything and ease my anxiety.

In the darkest times, though, lists and plans made me feel worse. They emphasized what I felt I “should” be doing and couldn't.

So if I could go back, I'd tell myself to try letting go of lists and plans now and then. They can be useful tools, but they're not the right ones for every circumstance.

That’s all for today.

I hope some of my story gives you some ideas or inspiration if you're struggling with injuries or health issues.

P.S. For more on anxiety and well-being, you might find Happiness, Anxiety, and Writing: Using Your Creativity To Live A Calmer, Happier Life helpful.

2 thoughts on “Writing When Injured Or Not Well”