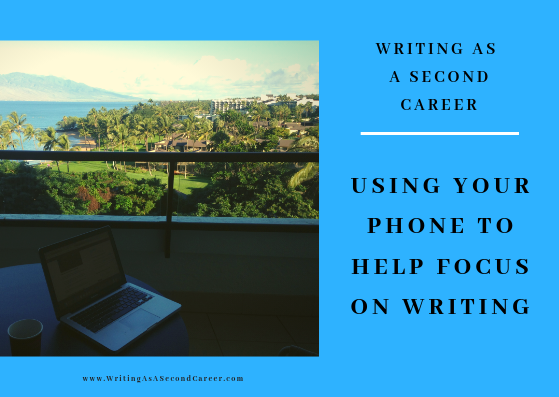 Your phone can help you focus on writing or it can distract you.

The best way I've found to use it to focus is to consciously choose these 3 things:

Where To Put Your Phone When You Write

Because you'll be using the phone's timer (more on that below), you'll need it to be somewhere close enough to hear. But don't keep the phone in the same room.

First, studies show that having a phone within reach, even if it's turned off, lowers our mental capacity for other things. Some part of our brain is always listening for the phone.

This article about the McCombs School of Business study at the University of Texas at Austin puts it well:

My own experience bears this out.

When I leave the phone on the bookcase in the hallway outside my home office I feel much more focused and often forget about time passing. If the phone is within arm's length, though, my mind wanders often.

Second (you forgot there was a second didn't you?), putting the phone far enough away that I must get out of my chair to reach it ensures that I will move and stretch enough during my day.

Most phones have a setting called Do Not Disturb (or sometimes No Interruptions).

This setting suppresses all alerts, including social media, and any notifications of texts, emails, and phone calls. When this setting is activated your phone will not ring, make any other noise, or vibrate.

You can customize the setting to allow calls from certain numbers or repeat calls from the same number to come through.

That way if, for instance, you're the person your aging grandmother depends on for a ride to the doctor, you won't miss her call.

Time To Focus On Writing

Now that you found a home for your phone and put it on Do Not Disturb, set its timer.

Choose a length of time to write that's short enough that you won't worry you're missing out or falling behind by not checking messages or social media or doing other tasks. But the block of time should be long enough that you can get something significant done on your current writing project.

After 30 minutes, I walk over to the phone to shut it off. I then reset the timer for 3 to 5 minutes and stretch during that time. Doing so helps me alleviate aches and pains from sitting too long in one position. I also look at messages to be sure none require an immediate response.

If I still have time in my day to write, I reset the timer for 30 minutes.

You can repeat this process as many times as you want to. But even if you only write for one 15-30 minute block you will make progress.

That's all for today. Until next Friday —

P.S. Not sure what to write during that 30 minutes? If you're having trouble getting your novel started or you're stuck in the middle, Super Simple Story Structure: a Quick Guide to Plotting and Writing Your Novel might be able to help. It's available for multiple e-book platforms, as an audiobook, and in a workbook edition. 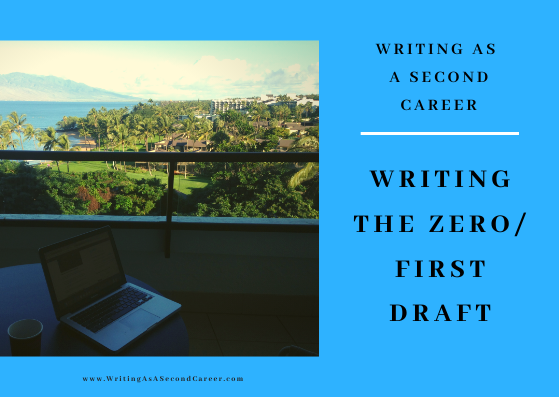 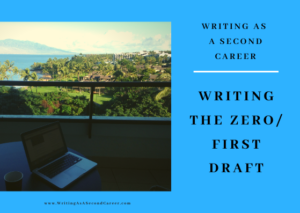 At a Sell More Books Show Summit I attended author Rachael Herron used a term I hadn't heard before: the zero draft.

By this, she meant the initial very rough draft–so rough you'll never show it to anyone–of a novel.

That phrase fits my first draft of a novel perfectly.

And that's the good parts.

For me, though, starting with a zero draft is the most effective way to get a novel written.

What works for me may not work for you, but if you'd like to write faster or are having trouble finishing your novel, why not give it a try.

The Zero Draft Frees You

Though I didn't use the phrase Zero Draft, for all the books I've published, both fiction and non-fiction, it's exactly what I write first. (Typically I do a rough outline before the draft, but you can write the zero draft on the fly if you'd rather.)

Allowing yourself to write a draft that makes no sense and has all the faults I mentioned above shuts off the editor side of your brain.

It's the best way I've found to write and finish fast because you know the draft will be bad and unreadable. You know you won't show it to anyone. Ever.

Plot And The Zero Draft

For me, the zero draft revolves around the plot. I want to get my story on paper so I can see how well it works and improve it later.

This draft is where I see if my rough outline truly works.

Usually the first half follows the outline very well, though I often realize there are gaps I need to fill in so that it makes sense. The climax also usually remains as I expected, at least from a big picture sense.

I know who wins and who loses, so to speak, and often where the climax will happen.

Typically I change what happens from the mid-point to the three-quarter point. Sometimes that's because my feel for the story and characters changes as I write. Or I realize what I thought would be a dramatic turn doesn't truly grow out of what came before it or feels dull–like merely more of the same.

On the fly, I try out a new three-quarter turn, making notes in brackets about what might need to change in the pages before.

Because of these changes, the last third of the zero draft is often what I think of as thinner than the first two-thirds.

Later I'll rearrange and expand. My changes to the first two-thirds when I rewrite almost always require that and guide me when I revise the last third.

What Not To Worry About In Your Zero Draft

You can write the zero draft fast because there are a whole host of things that usually slow the writing process that you can ignore:

This is a big one.

When I write the zero draft, I don't worry about changing a plot line in the middle of the book. If I'm concerned I'll be confused later I write a note in brackets and bold, something like: [change so Cyril stalks Tara before she meets him].

This approach saves you from going back and revising the early chapters, or perhaps the first half, of your novel each time you have a new idea.

Skipping those on-going revisions saves you a lot of time if you reach the end and realize you don't need that character after all, or you're dropping that sub-plot that seemed so brilliant when you were halfway through.

To love your story, your reader needs to be engaged with your characters. But the zero draft isn't the time to worry about that.

But if I simply need a character to fill a certain role–sidekick to the antagonist, alternate suspect in a suspense novel, protagonist's boss–and I haven't worked out who that person is, I simply write that character doing whatever it is I need the character to do.

Some characters don't even get names.

I just finished a zero draft of The Charming Man, Book 2 in my Q.C. Davis series, and I've got characters “named” Neighbor1 and Neighbor2.

Now and then in a zero draft I'll craft a sentence or paragraph that does exactly what I need and has a nice ring. Those sometimes survive to the final novel.

Most of the time, though, the lines will be rewritten for one reason or another. Many of them will be cut.

So as long as you've got what you need so that you understand it, don't worry about things like perfect grammar, ideal sentence construction, or using the same word too often.

After The Zero Draft

Once you have your zero draft on paper, you'll probably feel two things:

(1) Happy you finished (so celebrate!)

(2) Overwhelmed about what to do next

Rachael Herron suggests going through the zero draft and writing one sentence on an index card or sticky note for each scene. (You can also do this using Scrivener or some other software that allows you to write the digital equivalent of index cards or post its.)

This process gives you an overview of your plot.

I love this method, as it gives me a chance to see the gaps, the disconnections, and the lack of logic. (Did I mention my zero drafts are awful?)

I then rearrange and make notes on what I need to add.

After that, I revise the zero draft, again focusing mainly on plot but also on adding the characters I need and dropping the ones I don't. I don't try to write in depth scenes. My goal is for the story and the cast of characters to make sense.

Once that's done, I set the book aside for at least a week before I start the real revision process.

Which is a subject for a future article.

P.S. If you’d like to know more about the five-point plot structure I use, or want to try applying it to an outline or rewrite of your novel, download these Free Story Structure Worksheets.