How do you revise when your early readers find a scene or scenes dull or slow? 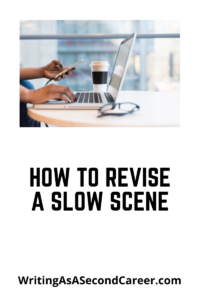 ugh feedback to hear, especially if you thought what you wrote was gripping.

At the same time, you've been given a gift. Knowing when a reader feels bored is some of the most valuable feedback you can get. Because now you can revise to keep readers engaged from start to finish.

Here are three questions to ask yourself:

Sometimes a scene or section of your novel feels slow because you don't need it. If you can remove it and the rest of the story makes perfect sense – and you don't lose any key character development – consider dropping it entirely.

2. Is it all exposition or backstory?

If the scene conveys information the reader needs, such as key backstory for a character, ask yourself if you can get that across more quickly. Or in a more engaging way.

For instance, let's say you wrote a flashback about your (adult) protagonist when she was ten and learned her mother died in a highway car accident.

Sounds fairly dramatic, right? But if it doesn't matter much to your present-day story, readers may very well find it slow.

Try sharing that backstory in a few sentences instead. Something like:

When she reached sixty miles per hour Anora immediately eased off the gas. When she was ten, her mother died in a highway crash. The other driver drove only ten miles over the limit, but it was enough.

You can also look for a way to convey the backstory through conflict. If your plot revolves around Anora's career you might try something like this:

Her boss frowned. “If I knew you planned to crawl there I would've driven. Pick up the pace or we'll miss the first half.”

“Fast?” He leaned closer to peer at the speedometer, which read fifty-five. “In no universe is this fast.”

“It is to someone whose mom was killed in a highway crash,” Anora said. But she pressed harder on the gas pedal.

3. Does it include unnecessary detail or repetition?

If the scene moves the story forward, look at how it's written. You may have included a lot of unneeded detail or information. Or you might be repeating too much.

Think about that friend or coworker who takes forever to tell a story and you're dying for them to cut to the chase.

A few things to look for as you revise:

For the most part you can cut hellos, good-byes, good mornings, how was your days, etc. We all say those things in real life, at least we do if we're polite.

But while readers want the flavor of real conversation, the parts that interest them are the parts with conflict.

If you have 3 sentences describing the icy walkway, revise so there's only one. If you include paragraph after paragraph of the viewpoint character's internal thoughts about their spouse, look at each sentence and ask if it truly adds anything you haven't already covered.

Look for instances where there's action or dialogue and you then tell the reader what it meant. In the dialogue above, for example, you don't need to add a few lines explaining that Anora's boss was irritated with her. Or that she pushed herself to drive a little faster because he was irritated, but it made her uncomfortable.

All that is already there.

I hope that's helpful. Good luck with your writing!