Whether you want to write a novel, novella, or short story usually depends on what you love to read. But it's also about your story idea.

Some ideas spark enough conflict and create enough questions to fill a novel or perhaps a series of them.

Others lend themselves to a quicker resolution. If you try to force one of those into a novel it feels like you're doing exactly that–forcing. Or stretching, filling, or padding, none of which makes for compelling reading.

How do you tell the difference?

All the points here cover what's typical, which means there are exceptions to every rule.

In between short stories and novels are novellas. Below 1,000 words usually is thought of as flash fiction.

Most short stories delve deeply into the life/mind/heart of one main character.

There simply isn't space in 5,000 words to develop more than one in enough detail to capture readers attention. The other characters' actions and words are relevant only to the extent they directly impact that main character.

In contrast, while a novel nearly always has only one protagonist, quite a few characters' lives are explored.

Some characters have their own stories that intersect with the protagonist's, but perhaps only in peripheral way. Readers often become great fans of side characters and may read the book as much to see what happens to them as to the protagonist.

The number of characters in a short story is usually limited to a few or a handful. Or perhaps only one.

If you try to use twenty named characters in a short story, it's likely your reader will be confused or you'll find yourself expanding into a novel or at least a novella.

Some novels have a fairly small cast of characters as well, so this factor isn't a black and white answer. But if you have only a few characters, it weighs on the short story side of the scale.

Ask yourself how dramatically your character must grow or change by the end of your story. If you want to show a complete turnaround, a novel will likely give you the space and time to make that believable.

It's not impossible to show dramatic change in a short story. Your main character can have an epiphany that causes a significant character development.

But in the flip of the number of characters factor, a tremendous amount of character growth typically weighs on the side of a novel.

Most short stories have one plot and only one plot. There are no subplots about the main character or about side characters. There simply isn't room.

For instance, in The Girl On The Train, the main plot is solving the crime the protagonist believes she's witnessed. Subplots include her relationships with her ex-husband and the friend she's staying with, as well as her self-esteem issues and struggle with alcohol.

As another example, the plot in Pride and Prejudice follows protagonist Elizabeth and her relationship with Darcy.

A very well-developed subplot, though, occurs between Eliza's sister Jane and Bingley. That subplot gets almost as much space in the novel as the main plot. The novel also features subplots about Elizabeth's younger sister Lydia, her father's realizations about himself, and her friend Charlotte. 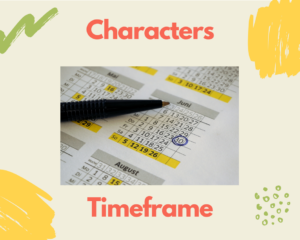 That timeframe could be anything from hours to days or weeks, but is rarely longer.

Novels, on the other hand, can span decades or generations.

That's not to say a novel can't take place in a shorter timeframe. Right now I'm working on one (The Charming Man) that occurs within less than twenty-four hours. But as I'm doing it, I've realized a few times what a challenge it is to compress so much into a short timeframe.

As with timeframe, a short story often features only one or two settings. Otherwise, the need to describe each setting alone can stretch the narrative beyond the common length of a short story.

In contrast, novels often range across the world (or more than one world).

Most writers tell their short stories using only one point of view. That keeps the reader focused and engaged and keeps the scope of the story narrow.

Some novels also are told from only one point of view, that of the main character.

Private eye novels are often a good example of this approach. But novels allow for exploring multiple characters' viewpoints because you have enough space to transition the reader from one character's world to another's.

If you prefer to tell the story from more than one person's viewpoint, or if your story demands the reader see through more than one character's eyes, your idea probably is best suited to become a novel.

None of these factors presents an open and shut case for what type of story you're writing. But the number of points-of-view, storylines, characters, and settings you need, and the timeframe and character growth required, provide good guides for whether your idea will work best in a long or short form.

If you're still unsure, though, experiment.

If you start what you think is a novel and discover your conflict resolves within a chapter or two, you can always go back and simplify whatever you need to so that it works as a short story.

If you're up to 20,000 words in your “short story” and you're introducing a new character vital to the plot or you've embarked on a subplot that absolutely needs to be there, congratulations, you're probably writing a novel.