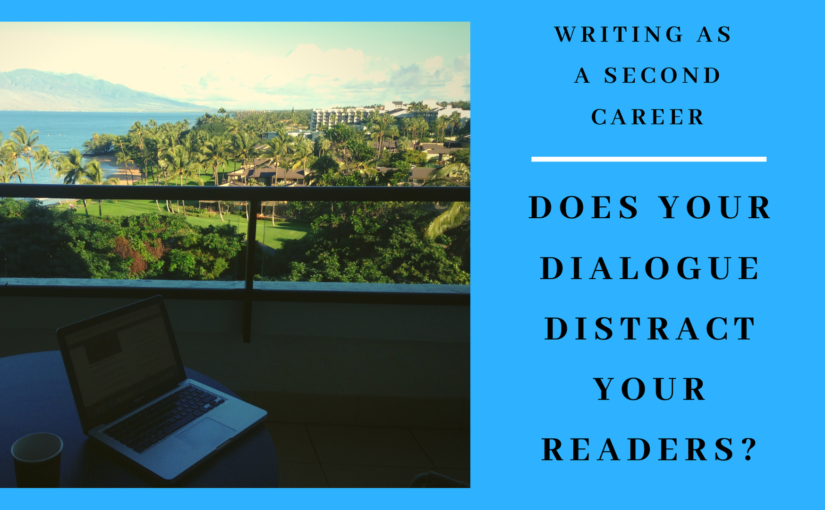 Recently I read a novel where the dialogue and dialogue tags distracted me to the point that I almost couldn't finish the book. Which is too bad, as it's a mystery/thriller, and I love its concept.

Here's an example of a dialogue section I made up that's a little extreme but isn't far from what's in the book:

“Good. Did you hear there was a fire in the grocery store?”

“Yes, that is so terrible!” Jack exclaimed.

There are a few things here that make the dialogue distracting and hard to read. All can be easily fixed.

First, the dialogue includes no contractions.

There are times people choose to speak without contractions, usually for emphasis: “I did not take that last cookie.” (I didn't, really.) “You are not going out again tonight.”

But most, though not all, English speakers in the U.S. use contractions the majority of the time.

You can definitely write a character who doesn't use contractions or rarely uses them. But you should know why that is. For instance, someone in the habit of writing or speaking in formal settings, such as a professor, might use fewer contractions. Or a character might come from a country where contractions aren't common.

Or the character might be trying to sound formal or highbrow.

If you decide a character won't use contractions for whatever reason, though, be sure other characters do use them. That way you'll show a contrast in speaking styles and won't confuse the reader.

And if all your characters are going to avoid contractions, as Sharon and Jack do, you should have a good reason for that. One that's clear from the story.

Otherwise, your reader will spend time wondering why they talk that way. Or, worse, stop reading because the dialogue feels unrealistic.

If you text or email a lot, it's easy to get into the habit of using a lot of punctuation. In short messages, we need it. Maybe some emojis, too, to convey tone. Otherwise a note that says “Good luck” can be read as encouragement, sarcasm, or skepticism.

In a novel, though, it's better to convey tone through the word choice itself. Or through a character's actions. For example:

The second one not only conveys Sharon's happiness, it gives us a hint of conflict. It suggests Jack told her before the scene started that he probably wouldn't get there. That suggestion makes us wonder what changed.

The dialogue as originally written, though, distracts from the story. Because right away the reader wonders why Sharon is so excited about just saying hello to someone.

Also, exclamation points are meant to convey significant emotion. If every other line includes one, it loses its power. (Find out more about what to leave out in 3 Things To Omit From Your Dialogue.)

Dialogue Tags: She Said, He Said

Writing the word “said” over and over can feel repetitive. But for readers, the word is almost invisible.

On the other hand, words like exclaimed, murmured, and shouted can be distracting. First, we're not used to seeing them. Second, as with exclamation points, it's stronger if your dialogue or the character's actions convey the way your character is speaking.

If the actions or words show the manner of speaking, then the dialogue tag is redundant:

The “she yelled” just doesn't add much. You can leave it there, but the lines are more powerful without it.

More troubling is where the descriptive tag and the dialogue don't match.

The above example makes the reader pause and wonder why the character is shouting. If she's yelling to someone on the other side of the street, it makes sense, but you'll need to tell the reader that.

Right now, it reads as if she might be yelling at someone standing right in front of her.

In contrast, if you use “said,” the reader doesn't wonder about the line but instead reads on for what happens next.

If you feel you simply have too many “saids” in a row — particularly if you're releasing a book for audio, where repetitive words stand out more — try instead using an action.

In the last example, you can drop the dialogue tag entirely.

The action tells us Ellie is speaking. If you want to go further and show Ellie's emotion or more about the situation, you could change the action. Both of the following convey different moods and change reader expectations.

Notice that both also suggest to the reader how Ellie might have said the words “Good morning.” Angrily or loudly in the first example, quietly in the second.

Action Items For Your Writing

That's it for now.

P.S. The more developed your characters are, the easier you'll find it writing dialogue for them. Creating Compelling Characters From The Inside Out can help.

As an Amazon Associate I earn from qualifying purchases made through this site, but that doesn’t change the purchase price to you as the buyer.