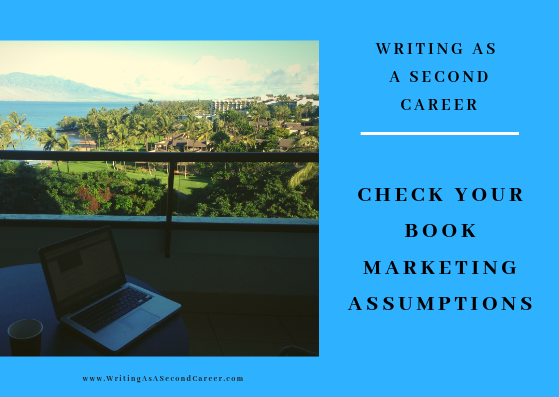 Understanding your long-term sales figures can significantly improve your book marketing. I say this from experience.

I spent a lot of time yesterday and today running figures. It undermined a lot of assumptions I hadn't even realized I'd made.

What might you discover by checking your sales data?

Where Are You Selling?

You may think you know where your books are selling.

And you might–in a big picture sense.

I figured my sales (excluding audiobooks) for this year to date would break down around  70% Amazon/30% all other sales venues combined (Kobo, Nook, GooglePlay, Apple, Ingram). And when I checked the numbers, that's about right.

But when I looked by genre, I discovered a more nuanced picture.

My non-fiction books are 95% Amazon/5% Other, mainly because I only recently made them available on other platforms. Without a past sales history, I figured Amazon would dominate, and it does.

My new mystery series is a 57/43 split Amazon/Other.

While a 3% difference for the fiction series doesn't seem like much, I find it striking because I've been running Amazon ads regularly to the mystery series and only now and again advertising by targeting other platforms.

That suggests to me that at least for now, I ought to spend more on the other platforms where the books seem to be gaining traction.

At the same time, I'll probably hold off on more Amazon ads until I figure out what targets work best. Or perhaps until I have more books out in the series.

Launch Marketing Isn't All There Is

I've been feeling a little discouraged about my new Q.C. Davis mystery series. It's had a slow start. In fact, until I looked at numbers, I thought it started much slower start than my previous series, which falls within the supernatural thriller genre.

Here's what I learned for Amazon and Kobo for the first series (Kobo is my second-best sales platform for it):

As you can see, the only book that did its best during the release month was the fourth and final book in the series.

And the Box Set was dismal on release.

This year, though, despite putting it an 99 cents for a special in June, it earned me over $1800 this year to date. This data tells me it's well worth marketing the box set on an on-going basis. And perhaps the individual books in the series, too.

Because Amazon sales overall are generally higher and spike more with promotions, it's easy to overlook the total sales on lower volume platforms. I look at the sales dashboard on Apple and see many days with zero sales. A good day is 5. Also, I assumed Kobo would be my second-best sales platform for my mystery series because it is for my supernatural thriller series.

That's why it's important to look at actual figures and total sales over time.

For example, before I added the total sales for the 2 books in my new Q.C. Davis mystery series, I thought I was selling almost zero on Apple. I figured it broke out like this:

When I added the figures, here's what I learned:

As you can see, Apple was strikingly different than I expected. And Nook sales equal Kobo sales. I'd felt frustrated at getting “nowhere” on Apple because it seemed I'd only see 1 sales here and there. But those 1s were adding up.

Because of this, I will now look more closely at marketing to Apple readers.

You May Have A Surprise Bestseller

Sometimes a particular book's marketing is paying off better than you thought. Or the book simply speaks to people more than you expect.

For me, that book is The One-Year Novelist: A Week-By-Week Guide To Writing Your Novel In One Year. I felt sure this book was only doing so-so.

Because there's so much emphasis in the indie author community on rapid release. That is, writing and releasing a book every month or at least every 3 months.

When I first started publishing I was working 55 or more hours a week running my own law firm. I released books when I could, which wasn't very often.

Now I still do things other than writing, including teaching and handling law projects. I discovered I'm happier that way. So while I release a couple books a year, usually only one is a novel.

In short, I wrote the How-To book I would have liked to have when I was writing my first few novels. I wasn't sure how many other people it would speak to.

It turns out that of the revenue from my 4 non-fiction books on writing, 57% comes from The One=Year Novelist (ebook and workbook editions) and 43% from the other 3 books combined.

Sometimes it really is good to write the book you want to read.

That's all for today. Until next Friday–