On Friday, I recommended two resources for creating marketing plans for your novel and promised to share what I've done in in 2017 and how it's worked out.

My main goal for advertising and marketing for 2017 was to bring new readers into my Awakening Series.

My main strategy was to list the first book in the series free.

I thought that might be worthwhile because the final book, The Illumination, released in May in ebook and paperback, and the audiobook edition became available this month, so at last the series is complete. (I published The Awakening in ebook format back in 2011 and waited far too long to write and publish the other three books.)

BookBub is one of the only enewsletter featured deals that has paid for itself and generated significant additional income each time I've been able to get one.

(The BookBub Featured Deals are a single listing for a flat price in the enewsletter, as opposed to BookBub ads, which appear at the bottom of the newsletter and for which you pay per impression.)

I had a few features in previous years with The Awakening ebook editions at a sale price of $0.99 (regular price has varied from $2.99-$4.99). But BookBub turns down many applications for deals, and it seems to get harder to get one the longer a book is out.

I applied two or three times in late 2016 and was turned down until I switched The Awakening to free.

By mid-afternoon March 6, the day the feature ran, it was No. 11 on the overall list of Free Kindle books. By evening, it reached No.5. 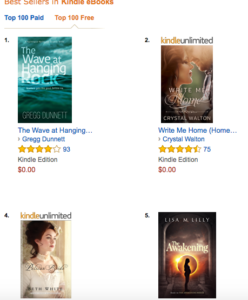 What Does Free First In Series Mean For Sales And Royalties?

Obviously, there are no sales or royalties on a free ebook, only downloads.

There is one exception–sort of.

When there's a spike in downloads, I usually sell additional audiobook editions as well as a paperback or two. Audible usually discounts the audio price, and the paperback royalty is low, so I estimate in 2017 that added up to not much more than $100-$200  over the course of the year for Book 1 in The Awakening Series.

The real boost came from the remaining books in the series.

In March, Books 2 and 3 were for sale and Book 4 available for pre-order on five ebook platforms (Amazon, Kobo, Nook, GooglePlay, and iTunes).

On Amazon, royalties for the Kindle editions of The Awakening Series totaled about $3,400 for January through November, 2016. This year for the same time period, the total was $7,282.63.

During both 2016 and 2017 I also advertised The Awakening and sometimes The Unbelievers in other enewsletters. (For limited times, I discounted The Unbelievers to $0.99 compared to a regular price of $3.99-$4.99.)

These other enewsletters also resulted in spikes in downloads.

In fact, just last Friday, The Awakening reached No. 1 on the Occult list for Kindle due to a Fussy Librarian listing. 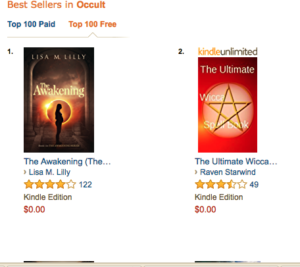 The numbers above reflect a lot of variables.

So for the first four months of 2016, I only had two books out in my Awakening Series. If I could have had the whole series released in 2016, presumably those numbers would look a lot better.

Also, I updated all my covers in 2017. The news ones more clearly brand the series and better convey the type of book.

Finally, there's no way to know what my royalties would be if I'd left The Awakening at $3.99 and run $0.99 sales periodically rather than leaving it free for the year.

I think it's unlikely I would have gotten a BookBub Featured Deal, so I would not have had that big spike in March 2017. But I probably would have gotten $0.99 listings in other enewsletters, as most have accepted The Awakening every time I've applied over the years.

Also, readers are much more apt to read a book they paid for, even if they paid only $0.99 cents, than one they downloaded free. So while I'd have a smaller number of Book 1s on people's ereaders, there might be a higher percentage who actually read it and bought the later books.

In the end, I feel it was worth making Book 1 free.

There were over 60,000 downloads, so despite that probably less than 10% of them resulted in actual reads of the book, that many people saw it, liked the cover, and are likely to remember it if they see it later.

That's a type of reach and advertising that's expensive to buy, and through a BookBub Featured Deal and other enewletters ads, my advertising dollars generated a net profit.

That being said, I'm considering putting The Awakening back at $3.99 in January and running some $0.99 sales to see how that goes for 2018. (I'll talk about other reasons for that in a later post.)

Either way, I'll let you know.

What's your experience with free first in series? Please share in the comments.