When it comes to describing setting in your fiction, how much is too much?

On the one hand, where a book is set can encourage readers to buy it. Recently I picked up a mystery solely because it was set in Paris, a city I love.

Plus, some novels do such a wonderful job describing the settings that I find myself longing to go there. That can be true even if I’ve already found that I don’t like a place.

As one example, with apologies to Londoners, it’s not a city I long to visit again. Twice was enough. Yet whenever I read Robert Galbraith’s Strike novels or J.F. Penn’s Brooke and Daniel series I find myself wanting to follow them down gloomy winding streets to discover whatever is hidden there.

As a writer, setting has always been important to me, too.

In my Awakening supernatural thriller series, my characters travel the world, seeking answers and fleeing antagonists everywhere from crowded city markets to mountain synagogues to isolated rural communities. And in my Q.C. Davis mystery series I often see Chicago itself as a character.

But while one reader might love in-depth descriptions of characters struggling to get home through a blizzard in 40 mile an hour winds, another may yawn and wonder when will the story start? 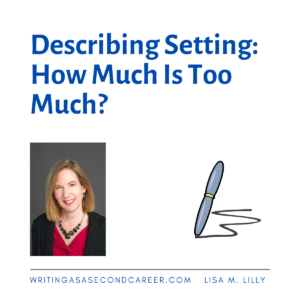 If you find yourself struggling with striking the right balance, some tips from Fiction First Aid: Instant Remedies for Novels, Stories and Scripts by novelist and writing instructor Raymond Obstfeld might help.

First, Obstfeld says it’s key to figure out what role the setting plays in your story.

Ask yourself if your particular setting significantly affects your characters’ personality development or the plot conflicts. If the answer is yes, you need to describe the setting in more depth so that the reader understands how important it is.

But when doing so, Obstfeld still stresses that you should still hone in on what is significant about the setting:

Think of fiction setting the same way you might a play’s set. Most of the time a stage play uses set design to imply the larger setting.

Obstfeld suggests highlighting a specific detail rather than overwhelming your reader with every aspect of the setting or using a lot of metaphors or similes.

A great example of this comes from John Sandford’s Phantom Prey. Below is the first line of a scene where the protagonist goes to investigate a murder. It’s the only line describing the house’s interior in the scene.

Anson was leaning on the second-floor banister, overlooking the stairwell, talking to an ME investigator.

Notice the only detail is the second-floor banister that overlooks the stairwell. But it tells us about this house. We know it has at least two floors. Also, I imagine an older home because of the use of the word banister, which for me evokes an antique feel.

In contrast, the first paragraph of Chapter 5 in Sara Paretsky’s novel Hardball goes into more depth as to the Chicago setting, which is key to nearly all of her V.I. Warshawski novels. The city itself matters deeply to the protagonist, V.I., so we see it in a very personal way through her eyes:

Traffic’s become like Mark Twain’s old bromide: we all whine about it, but no one tries to fix it. Even me: I complain about the congestion and then keep driving myself everywhere. Trouble is, Chicago’s public transportation is so abysmal, I’d never have time to sleep if I tried to cover my client base by bus and El. As it was, my trip home took over forty minutes, not counting a stop for groceries, and I only had to go 7 miles.

Both books fall within the same genre: suspense/mystery. And these are two of my very favorite authors. Yet their approaches differ in these passages, reflecting whether the setting is primarily key to plot (Sandford) or character (Paretsky).

That’s all for now. Next I’ll talk more about choosing settings that will have the most impact on your story.

P.S. Looking for more help with your novel? Download free story structure worksheets and learn about other resources here.