Most writers at some point ask someone else to read and critique their writing.

A constructive critique can help you improve your story. But criticism at the wrong time in the process can keep you from writing, undermine your confidence, or prompt endless rewrites.

So when are the best and worst times to seek critiques?

Too Much Criticism Too Soon

One long-time writing friend told me she shared the first short story she ever wrote in a critique group.

Unfortunately, the group leader made a scathing comment about her story’s premise, completely dismissed the entire piece, and cut off anyone else’s feedback. She was devastated.

For decades since then she has struggled to finish anything. She rewrites constantly, always afraid of being criticized. The rare times she sends a story anywhere, she stops as soon as she gets one rejection.

She's a very talented writer. Sadly, almost no one gets to read her work.

Her experience demonstrates the dangers of criticism too early in your career. (And of uncaring and unhelpful group leaders.)

If you are just starting out, unless you are extremely thick-skinned, it's best to finish several stories before showing your first one to anyone for a critique. You’ll learn a lot by writing multiple pieces. You also won’t be as attached to your first one.

Or, rather than keep your stories to yourself, you can specifically ask only for encouragement.

Seek out a group that has a goal of pointing out what's working in early drafts rather than what's not working. Choose carefully with whom you share your writing. If your mom is your biggest cheerleader, by all means give her a story to read. If she tends to pick apart everything you do, cross her off the list.

But how about if you've written a number of pieces already and you really want feedback?

Too Soon In The Process

My first drafts are terrible.

I aim to write quickly, and worrying about what someone else might say about the writing keeps me from doing that. So I purposely write very rough drafts that no one but me ever sees. (For more on that process, see Writing the Zero Draft of Your Novel.)

Only my second or third drafts go to beta readers, writing instructors, or critique groups.

Even if you don't deliberately write something you know is bad, it’s worth setting aside your draft for at least a week or two. Read it after that with fresh eyes. You’ll see issues you can fix yourself.

Doing your own first critique will help you develop your writing skills and gain confidence because you're able to see what can be improved. It also makes it less likely the amount of feedback you get when you do seek an outside critique will overwhelm you.

Getting feedback too early isn't the only issue with the timing of critiques.

It's also possible to get criticism too late in the process.

Two weeks before you plan to hit publish or send a final draft to an agent or editor you ask a friend to proofread. The friend asks if you would also like comments.

You shrug and say sure. Why not? You feel good about the novel and you're sure any feedback will be minor.

Instead, you get an extensive critique.

Whether or not you'd like to make the changes, sometimes delay isn't a good idea.

You may have set a preorder date with a publishing platform that will penalize you for not delivering on time. An agent you queried may be less interested a few months down the road.

Or you might have worked on your manuscript so much that you just can't face making more changes.

Unfortunately, now that you have the comments, even if you disagree with them, odds are ignoring them will undermine your confidence in your work. It also may irritate your friend who took the time to give the feedback.

For these reasons, it's better to be honest with yourself and with any last-minute proofreaders.

If you really don't want a critique at this stage in the process, be clear about that. Ask your last readers to look for proofreading errors, and perhaps continuity or consistency errors, only.

You can pretty easily fix those issues, and doing so will improve the quality of your product without undermining your process.

So when is the right time to seek a critique?

Figuring out when a critique will help involves a bit of trial and error. You'll need to see how you feel when you get a critique back at different stages of your process.

And, just as important, whether criticism at that time helps you improve your writing.

There are a few questions you can ask yourself, though, to try to figure out if this is a good time for a critique (or more than one):

The more of the above questions elicit a Yes answer, the more likely it is a critique will be helpful.

That's all for today. Until next time —

When marketing a book, most authors include an author photo. If you have a website, you've probably got an author photo there, and one on the back of your book.

But other less formal photos of you also should be part of your marketing.

The Back Of The Book Photo

If you're like me, your official author photo is a head shot. Below is the one I use on my author website. (I use a different one on the About page of this site, but it's also from a professional studio.)

Your photo might be retouched a bit if you went to a professional studio or, these days, if you've figured out how to do that on your phone.

Odds are, it's also one of your favorite photos of yourself.

All of that is great.

In fact, I feel like it's key to use an author photo that conveys that you're someone with a writing career, who takes care with your appearance.

That suggests you also take care with your writing and makes strangers feel more comfortable buying your work.

Many writers, though, hesitate to post other photos of themselves with their books on social media or on their sites.

Or you might be self-conscious about not looking your best in a candid shot or one that you take yourself. It's not as easy to get the best angle.

Getting an ideal background can also be tricky.

But your photos don't need to be perfect. The photo below is not.

The background strikes me as kind of blah. You can't see my whole book cover. The light catches flyaway hair near my part.

And yet when I posted this photo with a note about “Look what came in the mail!” I sold a dozen paperback copies of The Fractured Man that same afternoon.

That may not seem like a lot, but most of my sales are ebook or audiobook editions. Typically I release the paperback for price comparison purposes and so I have something to sell at live events.

Otherwise, I sell one or two every month or so. I've never had a dozen ordered at once.

In fact, when I specifically created a post with the professional 3-D book cover for the second book in the same series and a note about the paperback being available, I sold just one paperback that day compared to dozens of ebook editions.

What this shows is (1) people respond not just to your book but to you and (2) a more candid shot is a lot more fun and engaging.

It shows who you are.

But on social media, let go of your concerns about the perfect shot and post as you would about anything else in your life that excites you.

That's all for now. Until next Friday–

If you want to improve your writing craft, and you're a fan of Buffy the Vampire Slayer (or you're thinking of watching the series), check out my new podcast Buffy and the Art of Story.

Each week I talk about what we can learn about fiction writing from a Buffy episode. 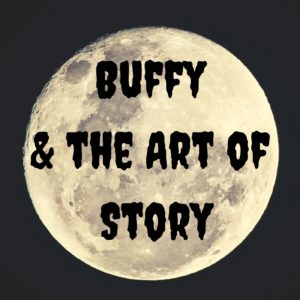 Buffy is a well-written, well-crafted show. Because of that, I expect to learn a lot about fiction writing in the process.

Transcripts will be included for each episode if you prefer to read. I also plan to write a book for each season based on the podcast.

Where To Find Buffy and the Art of Story

The first two episodes are on my author website now. More to come on Monday nights.

You can also find it on Stitcher, Google Podcasts, Android, and eventually iTunes (just approved, so you may not see it just yet).

I've set a goal of covering every episode in order. That goal means a lot of podcast episodes, as Buffy had 7 seasons.

That's all for now. Until next Friday–